With the vultures now firmly circling the Manager, a win is an absolute must for the likable man from Northern Ireland. Lose this game and its curtains on the Brendan Rodger’s reign.

With that in mind, here is a possible team selection for a game against Aston Villa: 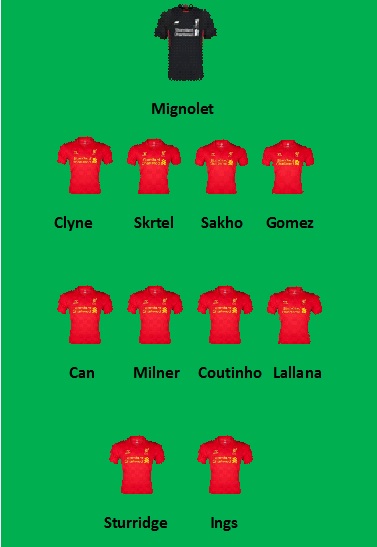 Sakho and Gomez to return in defence alongside Skrtel and Clyne with Can potentially dropping into a back three as Clyne and Gomez as attacking wing-backs.

I would have Daniel Sturridge & Danny Ings as a front two.

Its a must-win home game against an Aston Villa team who lie in 17th place in the League on six points, despite Tim Sherwood’s motivational abilities.

Everything rides on this one game: Brendan Rodger’s future, Liverpool’s Season and FSG’s decision after 90 minutes of Premier League madness.

Best of luck Brendan, show us you have what it takes man.