The January transfer window is fast approaching, and after a quiet summer of incomings at Anfield, will manager Jurgen Klopp enter the transfer market?

Past patterns would suggest no. Bar the 2018 transfer windows that saw Virgil van Dijk, and later Alisson join, we have rarely seen Fenway Sports Group (FSG) issue major investment in the club.

Transfers have been minimal in recent years, and Diogo Jota and Luis Diaz were the odd exceptions.

Unlike Manchester City who appear to strengthen at will, as do Chelsea and Manchester United. And surely the logic would suggest, if they have the money to invest and Champions League football, why doesn’t Liverpool?

And so what we have witnessed is Dutchman Gini Wijnaldum depart in August 2021 and there was no direct replacement.

This left a gaping hole in the Liverpool midfield, especially when Gini left in his prime and had such an influence on the side and how they played.

After all he was instrumental in the comeback win over Barcelona that ensured Liverpool won a sixth Champions League crown back in 2019.

A small attempt was made to invest in the midfield last summer when Arthur Melo came in on loan from Juventus.

However, this appeared to be merely a stop-gap and a short-term solution to provide cover for the then injured captain Jordan Henderson.

Although Klopp is a world-class manager, he must be acutely aware that he has an ageing midfield which must be addressed.

Even in matches this season we have seen the Reds outran and outdone by Leeds United, Nottingham Forest, Napoli, Arsenal, Manchester United, whoever it may be.

Even the frustrating draws this season and the previous showed that the team is lacking youth and energy in the midfield area.

James Milner, the 36-year-old veteran, 37 the first week of January, who was once famously the youngest ever Premier League goal scorer back in 2004 for Leeds United, is in the twilight and final stages of his career.

Even though he has been a fantastic servant to the club, and his winning mentality would be missed if he retired in 2023 or 2024, is not the future of the club.

Meanwhile, Henderson is 32, Thiago Alcântara 31, and Fabinho 29, shows that the club needs a younger engine in midfield combined with experience.

They have of course tried to blood youngsters in the form of Curtis Jones, who is extremely talented, along with former Fulham youngsters Harvey Elliot, and more recently, Fabio Carvalho.

But the Premier League table doesn’t lie. This midfield alone is not enough to be title winning material. They are 6th for a reason.

Therefore, some major surgery is needed. But who could Liverpool get?

Jude Bellingham of Borussia Dortmund is the standout choice, but is one of the most sought-after players in world football.

His skill and maturity mean he will one of the world’s best soon enough.

However, Real Madrid are rumoured to have stolen a march on the Anfield giants and said to have submitted a bid of 120 million euros.

Bellingham is said to be close with Henderson and Trent Alexander Arnold, so whether the Liverpool boys can persuade him to return to England is another matter.

Other alternatives would be World Cup stars Sofyan Amrabat of Fiorentina who was incredible in Morocco’s march to the semi-finals, and Argentina’s Enzo Fernandez of Benfica or Alexis Mac Alister of Brighton.

All of which would be significantly cheaper than Bellingham, but would certainly command a high price particularly the Argentina cohort after their World Cup winning exploits.

The Bundesliga does have Konrad Laimer of RB Leipzig, where alumni’s such as Naby Keïta and Ibrahima Konaté have previously plied their trade, making this a possible option.

And Florian Neuhaus of Borussia Mönchengladbach is another young enforcer who could make all the difference in winning the midfield battle for Liverpool.

It’s clear they need fresh bite and energy in the middle of the park, and with Keïta and Alex Oxlade Chamberlain spending the majority of their Anfield careers injured on the sidelines, surely logic would suggest finally offloading them and investing wages in fitter players.

But don’t hold your breathe. FSG have been reluctant to invest in the past, particularly after the Covid pandemic.

All the Liverpool faithful can hope is that Klopp can persuade the hierarchy that major surgery is needed if he is to continue carrying this team forward to the best of his ability. 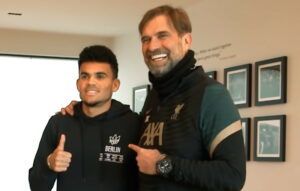 Liverpool left it late but swooped to sign one of the biggest stars in Portugal, in Luis Díaz for a fee of £37 million, rising to a potential £49 million.

Xherdan Shaqiri has given Liverpool fans fresh hope that he will sign for the Reds after admitting he’d like to stay in the Premier League. Shaqiri has displayed some fine form for Switzerland during the FIFA World Cup in Russia this summer and his performances have alerted willing suitors keen to recruit the diminutive frontman’s […]