Jurgen Klopp’s charges stayed in every single competition to the last game and second. Does that therefore rank as their greatest ever season?

In winning both the Carabao Cup and FA Cup after a decade and more in both cases, as well as narrowly missing out on the Premier League title and the Champions League, I would argue yes.

But first let’s begin with the Premier League. 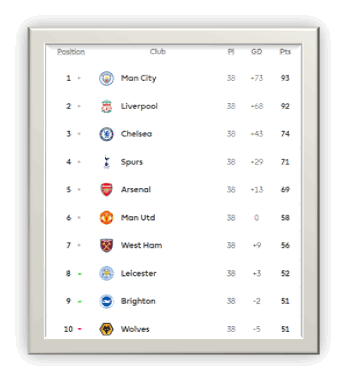 That gave them a total of 92 points, which would by any stretch have been more than enough to be crowned Champions of England.

It would even have overhauled virtually every one of Sir Alex Ferguson’s title winning Manchester United sides from the 90s and 2000’s.

However, Manchester City, dare I say it, were more consistent, by a solitary point, triumphing with a total of 93 points.

But again, City finished that season on 98 points giving Pep Guardiola yet another title.

What was strange was that Liverpool lost only twice last season, and once in 18-19 and still didn’t come out as Champions.

The same happened in 2008-2009 with Rafa Benitez, as his side lost twice all season, two fewer than Ferguson’s team but still famously missed out on the once holy grail of the Premier League title.
Of course, some will say Klopp’s team drew too many games in both seasons under the German, and in doing so, dropping vital points.

Had they beaten Antonio Conte’s Spurs in a 1-1 draw at Anfield on the 7th May, maybe they would have ended as Champions.

But to go the whole of the New Year in the Premier League and all domestic competitions unbeaten was some effort from the boys.

Winning the Double over Chelsea

Liverpool fans were left overjoyed having conquered years of hurt in both domestic cup competitions.

In beating Chelsea in both finals in two tense penalty shoot outs, they edged out their rivals to be record holders of the League Cup, winning the honour for a ninth time.

In doing so winning it for the first time under Klopp and the first in ten years.

Klopp and his team also got their hands on the FA Cup for the first time, meaning the German has won everything on offer in English football, thus adding to his legacy as one of Liverpool’s greatest ever managers.

As well as seeing off Leicester City in the quarter finals, 5-4 on penalties after a 3-3 draw in normal time with Takumi Minamino’s last-minute strike their saving grace.

In the FA Cup, a stunning semi-final victory over old rivals Man City with goals from Ibrahima Konaté and a brace from Sadio Mane enough to give them a famous win.

Having famously lost the 2018 final to Los Blancos, Mohamed Salah and his side were sensing revenge, after the Egyptian was famously by a Sergio Ramos foul.

It was also the Italian’s fourth European Cup, having won it twice with AC Milan in the noughties and previously with Madrid in 2014, making him the most decorated manager in the competition’s history.

2019 winners Liverpool overcame Villarreal in the semi-finals impressively after winning the first leg 2-0 and storming back from 2-0 down in the second leg, to win 3-2 and 5-2 on aggregate.

Knockout wins over Inter Milan and Benfica in the round of 16 and quarter-finals respectively were impressive.

As was the perfect six wins out of six in the group stages, and the so called ‘Group of Death’, against Atletico Madrid, FC Porto and old rivals AC Milan.

But in their last game of the season at the Stade de France, Real Madrid were just too good on the night.

However, overall, it was a tremendous campaign for all concerned at Liverpool Football Club.