FINALLY A PROFITABLE END TO THE STERLING SAGA

So after months of wrangling Raheem Sterling has got his wish and its fair to say that Liverpool have too.

The youngster is free to join rivals Manchester City in a staggering £49 million deal. 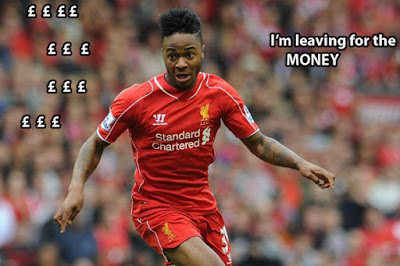 Months have passed since the young Londoner first declared that he wasn’t happy at Anfield, despite Liverpool under Manager Brendan Rodgers giving him the chance to play regular 1st team football at a very young age.

We took a chance on him, developed him and now he wants to leave.

That’s fine, young man, take your chances and your wages at the Etihad and thanks for the forty-nine million.