Liverpool began 2023 in the worst possible fashion as they were completely dismantled by a strong and confident Brentford side at the Gtech Community Stadium.

The result cracked Liverpool’s four-match win streak in the Premier League and brought them thundering back down to earth.

They now lie in sixth, a whopping seven points off fourth placed Manchester United, both having played 17 matches, as the race for the Champions League places intensifies.

For Brentford, they climb to ninth and are now just two points off the Merseyside giants.

Jurgen Klopp’s team almost made the perfect start as Mohamed Salah’s finely placed through ball was met by Darwin Núñez, who rounded goalkeeper David Raya, only for his shot to be blocked on the line by an impressive Ben Mee.

Brentford soon broke on the counter-attack, as their strikers connected superbly with Yoane Wissa setting Bryan Mbeumo away, but his left-footed toe-poke effort was palmed away by Alisson.

The resulting corner by Mbeumo was whipped in over the head of Mathias Jensen, and Mee flicked the ball against the calf of Ibrahima Konaté and the ball ricocheted off the Frenchman and into the back of the net.

Liverpool were left stunned as the visitors wheeled away in celebration.

But they almost equalised immediately as Harvey Elliot’s inviting delivery was missed by Núñez but Alex Oxlade-Chamberlain managed to wrestle the ball, back flicking it to full-back Konstantinos Tsimikas, and he leathered his shot straight at Raya.

Liverpool’s poor show at set-pieces continued as Mbeumo again whipped in a dangerous ball into the box, Alisson could only parry into the path of Ethan Pinnock who shot and then headed against the Reds keeper, and Wissa tapped in only to be denied by the linesman for offside and VAR. (Video Assistant Referee)

A third corner then came in, again from Mbeumo, causing all kinds of havoc for the Liverpool defence, as the ball landed to Wissa who chested the ball down and volleyed a fine deflected shot into the bottom corner, as the Community Stadium erupted.

However, it was again ruled out by VAR as the ball cannoned off Mee, standing in an offside position, as Wissa’s emphatic celebrations were cut short.

The Bees did eventually double their lead, as a costly mistake by youngster Elliot, gifted the home side possession, and they capitalised as Mbeumo teed up Jensen, who swung a delightful ball into Wissa, the Congolese’ glancing header just making it over the line, past a scrambling Alisson, who nearly kept it out.

More VAR drama came, this time Liverpool had a goal chalked off for offside as Thiago Alcântara played a superb ball forward to Núñez, who’s pace was too much for the Bees defence, and the Uruguayan lobbed the ball past Raya, only to be denied.

Liverpool have not won a match being 2-0 down at half-time for more than 14 years.

Not since October 2008 when they came from behind to beat Manchester City 3-2.

Boss Klopp was bold as he made three half-time substitutions, taking off the injured captain Virgil van Dijk, sending on Joel Matip.

And 19-year-old Elliot was hauled off following his first-half blunder, with the more experienced Naby Keïta slotting into the midfield.

And the German turned to the experience of Andy Robertson, who came on for Tsimikas at left-back.

And the substitutions appeared to work as Liverpool got a goal back.

Trent Alexander-Arnold cut inside and curled a fabulous left-footed cross onto the head of Oxlade-Chamberlain, who’s towering header marked his first goal in nearly a year, on his 100th Liverpool appearance.

Oxlade-Chamberlain and Alexander-Arnold urged their team to press for an equaliser as they chose to forgo celebrating.

And they nearly did as Konaté’s header whistled wide following a corner from Alexander-Arnold.

But hopes of securing at least a point were dashed six minutes from time, as Brentford counter attacked Liverpool to devastating effect, and World Cup finalist with France just last month, Konaté, slipped after appearing to get to the ball first, and Mbeumo rifled in to secure a famous win for the Bees.

It marked Brentford’s first win over Liverpool since the 1930’s, before the Second World War in November 1938, to be precise.

And gave them another major scalp since being promoted in 2021, adding to wins over Man. City, Arsenal and Man. United.

Although his side technically got blown away with conceding five goals, two disallowed, the Reds boss was critical of referee Stuart Attwell’s decisions, particularly for the third goal.

“Attwell thought it’s not a foul and VAR hides behind the phrase ‘it’s not clear and obvious’.

“The other way around, if it’s a foul you’d never say ‘no, no, no’. He’d explain that if somebody would ask him,” he said.

“The third goal has nothing to do with anything else, it’s just a foul. I really cannot respect it.”

And the German also criticised Brentford’s perceived foul-play at set-pieces, namely corner-kicks, which were a constant problem on the night for the former Premier League champions.

“We played here last year and it was 3-3 and it’s a very similar game, a wild game that Brentford wants,” Klopp said.

“I’m not sure you can really control it all the time because each corner is a massive threat.

“They stretch the rules in these moments, full-body contact,” he said.

“There was only one offensive foul off a set-piece tonight which was whistled and it was against us, which is really funny!

“They’re really pushing and holding. That’s why it’s really difficult. I wish we could have done better there.”

But Bees boss Thomas Frank laughed off any suggestions of foul-play.

“I guess we have some very, very good referees and then we have a VAR rule.

“It’s never been more difficult to score a goal.” 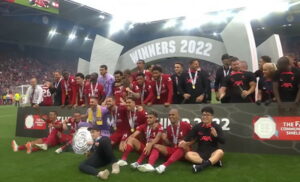 The absolutely huge chasm between the Merseyside clubs was there for all to see. In the red corner, Liverpool — reigning European champions and the team surely destined to pick up their first Premier League title given their big lead at the top of the table. In the blue corner, Everton — a side devoid […]