Jurgen Klopp’s side took a valuable three points as they managed to see off a spirited Aston Villa at Villa Park.

The win ensures that Liverpool keep the heat on Tottenham and Manchester United in the race for the top four.

The Reds are now five points off Spurs with a game in hand.

Boxing Day saw the long-awaited return of the Premier League, only eight days after the World Cup Final, where Argentina triumphed against France.

And Liverpool knew this was a game they could ill afford to lose or drop more points.

After 14 matches, the former Premier League champions had dropped 20 points, nearly the same number they had dropped the entirety of last season. (22)

Such was Liverpool’s poor form at times before the World Cup break.

But against Villa they made the perfect start as talisman Mohamed Salah scored after just five minutes.

Andy Robertson’s corner into the box was cleared only as far as fellow full-back Trent Alexander-Arnold, who played a delicious outside of the boot pass forward to Robertson, who crossed superbly for Salah to slam in the opener.

Liverpool’s players, in their stylish dark khaki Nike shirt and shorts, wheeled off to celebrate with the Egyptian.

It marked his 16th goal of the season, 12 in his last 12 and a milestone 172nd for the club, equalling Sir Kenny Dalglish.

Villa would rue their profligacy at front of goal, as Emi Buendia accelerated away down the left flank, only for a wasteful Leon Bailey to miscue his shot into the hands of Alisson.

Backed by a loud Villa faithful, a fine attacking move from the home side saw John McGinn produce an outstanding cross for striker Ollie Watkins, who fluffed another goal-scoring opportunity.

Manager Unai Emery, new at the helm, was left blowing his cheeks in frustration.

It was then striker Darwin Nunez’s turn to be wasteful, as the ball was launched forward only for the Uruguyan to shoot straight at Robin Olsen.

But the second eventually came in the 37th minute, as Alexander-Arnold’s corner saw pinball in the box, and Salah teed up Virgil van Dijk and the Dutchman hooked a sumptuous left-footed volley into the bottom corner of the net.

Goalkeeper Olsen left rooted to the spot with no chance.

A 2-0 cushion at half-time was the perfect tonic for Klopp and his players, so desperately needing the three points.

But whatever Spaniard Emery said at the interval worked as Villa came out the team on top.

Instantly Watkins raced onto a through ball and finished superbly, only for the goal, fortunately for Liverpool, to be ruled out for offside.

Klopp, his players and their fans breathing a huge sigh of relief.

But the villa goal was clearly coming and it did.

It was that man Watkins again, an adversary from the past as it was the Englishman who famously scored a hat-trick two years ago as Villa stunned the defending Premier League champions Liverpool 7-2 at this very ground.

Midfielder Douglas Luiz curled an exquisite ball into the box, and this time Watkins made no mistake, powering a fine downward header past Alisson.

Villa were handed a lifeline back into the match.

Liverpool then broke on the counter-attack, as Salah sent Nunez away, only for the 23-year-old to waste another glorious chance, one on one with Olsen, dragging his shot wide.

But Liverpool did get the killer third goal nine minutes from time as substitute Joe Gomez lofted a ball through to Nunez, whose shot from an acute angle was parried by Olsen, and the onrushing Stefan Bajčetić, danced through to score his first Premier League goal.

The 18-year-old Spanish wonderkid justifying why manager Klopp threw him into the game, and moments after stepping off the bench, he had made an immediate impact.

The goal clinching a hard-fought Liverpool win, to see that they sent out a huge statement to their rivals, that they are back and wanting to go on another winning run.

There is now only a four-day turnover till the next fixture.

Liverpool and boss Klopp will return to Anfield to take on former boss Brendan Rodgers and his Leicester City outfit.

The Midlands team are not the force that the Northern Irishman was made them having had back-to-back fifth placed finishes, after being in the top 3 most of those two seasons.

Followed up with a FA Cup success.

They have declined last season and this, but Rodgers will have a point to prove against his former employers.

Liverpool will get the job done. However, Nunez will need to be sharper up front and less wasteful.

More good assists from Alexander-Arnold will be needed.

Meanwhile, Klopp will need to shuffle his pack to contend with a testing festive fixture list.

One down, four to go. 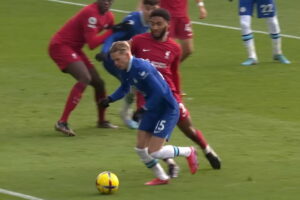 Liverpool Play Out Yet Another Goalless Draw With Chelsea

In a match low on quality, two of English football’s fallen giants played out a disappointing scoreless draw. The result does little to boost either team’s position in the Premier League table, and if anything encapsulates their underperforming seasons perfectly. For Liverpool, fans begin to grow frustrated as their side remains winless in the league […]

22 matches played and Liverpool have so far accumulated 57 points, accompanied with just one defeat. However, Brighton were no pushovers as Saturday’s match proved. Going into the game all the pressure was on the visitors. Liverpool having enjoyed a clean sweep of wins in December and unbeaten in the Premier League going into 2019, […]

Anfield, Liverpool – Only four days after getting a crucial victory away at Hoffenheim in the Champions League playoffs, Liverpool played host to bogey side Crystal Palace. There were very few teams who could match the London side’s impressive record against the Merseysiders coming into this clash. In fact Palace had come away from their […]