A Merseyside Derby is never a small fixture. Regardless of what is going on outside of these games they are always massive games for both clubs involved, make no mistake about that. That being said Jurgen Klopp found himself in the tricky, but appreciated, position of having a Champions League quarter-final second leg to prepare against Manchester City on Tuesday night. It took no importance away from this game despite what you might have read on Twitter, but it certainly added an extra dimension. Would Klopp make wholesale changes and who would he bring in as auxiliary? How would Liverpool cope without the injured Mohamed Salah? How would Everton respond Klopp’s teamsheet?

Everton’s season has been in tatters since September. Having gone through three managers before our first meeting with them in December, Sam Allardyce has done enough to stave off relegation. However, Bluenoses are still unhappy with Big Sam and the fact that this was their biggest of the season and they had nothing to play for but pride in it rankled. A strong side was named by Allardyce with this being the case, the strongest he possibly could name. Idrissa Gana Gueye returned from injury but was only fit enough to make the bench, so Morgan Schneiderlin joined Wayne Rooney and Tom Davies in midfield. Cenk Tosun has finally found his goalscoring boots since his £27 million move from Besiktas although fellow new arrival Theo Walcott has struggled somewhat. Both would start here looking to continue their respective settling in periods.

Klopp did make widespread changes to his Liverpool side obviously with Man City in mind. Loris Karius, Dejan Lovren and Virgil Van Dijk continued at the back, the latter pair most likely because there was no one else to deputise. Ragnar Klavan was preferred over Alberto Moreno to take Andy Robertson’s spot, while Nathaniel Clyne got his first start of the season since his back injury. Jordan Henderson was always going to play since he is suspended for the game on Tuesday night, and, again, a lack of cover due to injuries meant James Milner and Gini Wijnaldum had to join him. Up front, Dominic Solanke and Danny Ings joined Sadio Mane, with Ings making his first start for Liverpool since scoring on his last – a 1-1 draw in this very fixture in October 2015. Big names weren’t even risked on the bench, with Trent Alexander-Arnold, Alex Oxlade-Chamberlain, Simon Mignolet and Roberto Firmino being joined by three academy products, Rafael Camacho, Conor Masterson and Curtis Jones.

This was never going to be a derby of frenetic pace and non-stop action if we had our way and the game started out in such a manner. Everton’s midfield three couldn’t deal with the pressure being put on them by Milner, Henderson and Wijnaldum. However, the lack fo a direct runner in midfield hindered our chances of causing any significant damage to the opposition. Liverpool would create two early chances though for Dominic Solanke. The first came on ten minutes, when he did well to generate enough power from a James Milner cross to head towards goal. Unfortunately, he couldn’t direct it beyond Jordan Pickford and the ball dropped wide of the post at the Gwladys Street end. Six minutes later though Liverpool should have been ahead. It was another Milner cross from the left and Solanke was on the end of it again. He got his header all wrong and it rebounded off Michael Keane straight back into Solanke’s path. Instead of taking a touch in the empty six-yard box, he elected to hit it first time. His shot was straight at Pickford who still made a terrific save from Solanke’s pacey shot from five yards out.

Despite our early chances the game started to get scrappy. Liverpool were having a lot of the ball but because of that lack of direct running in midfield we found ourselves often lacking options. The ball would either go sideways or be given straight back to a blue shirt. Everton were getting some possession themselves because of this but just did not have the quality or the pace to hurt Liverpool, especially in the middle of the park. They would have one chance though that had red hearts in mouths. On twenty-six minutes Everton countered. Yannick Bolasie eventually found himself with the ball at his feet, twenty yards from goal, on the corner of the Liverpool box at the Park End. He stepped inside Clyne and curled a beautiful effort towards goal. Karius looked beaten all ends up but managed to dive magnificently to his left to pull off an astounding save. Karius has only conceded four goals in his last ten games and, with saves like that, it’s easy to see why that is the case.

There would be one last meaningful chance of the half before Michael Oliver blew his whistle for the break. James Milner had the ball on the left side of the box and was allowed time to come inside onto his stronger right foot. He attempted to curl the ball beyond Pickford at his far post but the England ‘keeper was equal to it, making a very good save to deny Milner. When half-time was called Jurgen Klopp will have been the happier of the two managers. Everton had hardly troubled Liverpool and his side were more likely to score, if anyone. Sam Allardyce was desperate for pace in midfield. They were unable to get the ball out wide quick enough and, when they did, the delivery from Bolasie or Walcott was good enough for Tosun.

Klopp doesn’t make changes at half-time and this game was no different. Liverpool took the onus from the beginning of the second half and Everton couldn’t get near us again. Gini Wijnaldum was particularly impressive throughout the ninety minutes, never giving the ball away and always finding a red shirt with his passes. He was able to find his way out of tricky situations and his physicality was something no Everton player, not even Gueye when he came onto the pitch, could combat.

As well as Gueye, who replaced an unhappy Wayne Rooney, Dominic Calvert-Lewin also came on in place of Bolasie to give the Everton forward line some energy. Klopp responded by sending on Alex Oxlade-Chamberlain and Roberto Firmino in place of Sadio Mane and James Milner. While these changes were obviously made with the aim to have a positive effect on the game, there is little doubt that the two players withdrawn will play some part on Tuesday night. Oxlade-Chamberlain had an immediate impact when he ran at the Everton defence and pulled the trigger from twenty yards, only to see his high shot land in the Park End.

This game seemed to be played out in a weird limbo. Everton’s morale is clearly low and has been all season. Their sole intention here would have been to avoid defeat first and try to win the game if the opportunity arose. Liverpool on the other hand didn’t need to win this game. Sure, on any other day this derby would have been played would have went all out for the three points. However, it is obvious we have bigger fish to fry and that was on everyone’s minds. It looked as if it might peter out into nothing. There would be chances though in the last ten minutes and Everton would be made to rue them.

On eighty minutes The Toffees decided to show up. Leighton Baines was played in well by Calvert-Lewin and fired a ball across the face of goal. Cenk Tosun slid in to convert into an empty net but Van Dijk managed to get a nick on it to send the ball beyond the despairing dive of the Turk. Minutes later Tosun had another chance. Walcott swung a lovely ball in from the right. Tosun fended off Lovren and headed towards goal from four yards out. His lack of balance when he made contact meant he couldn’t get direction of the header though, and the ball evaded the sliding Seamus Coleman and dropped just wide of the far post. With a minute left of normal time Everton again had the ball in the Liverpool box. Walcott squared it through a cluster of bodies and Calvert-Lewin raced onto it. Clean through with no one around him, the England under-21 striker looked certain to be on the cover of the DVD Everton usually release when they beat Liverpool. However, he got his shot completely wrong and side footed it over the bar and into the Glwadys Street. That would be the final big chance of the game as Michael Oliver blew his whistle for full time after the three minutes of stoppage played.

This was strange old game for Liverpool as never has a derby meant so little to us. There were people on social media saying that the result didn’t mean anything to them and they were solely concentrating on Tuesday night. Those people are liars. A derby never means nothing. Looking at this game without the context of what is to come, and you say it isn’t the greatest result or performance. Everton had two guilt-edged chances at the end they should have disposed of to win the game. However, given the team that was played, and you can probably say that it isn’t a bad point gained. Derbies are always tricky, especially at Goodison, and much better Liverpool teams have gone there to win and come away with nothing.

A lot was sacrificed for this game. It has to count when we travel to The Etihad on Tuesday night. 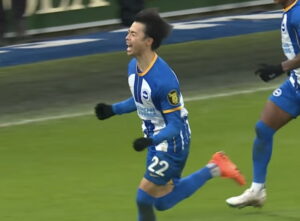