Liverpool were 3-0 victors over mid-table Bournemouth on Saturday as they to another victory in a very strong performance at Anfield. They oozed class throughout the game and exorcised a level of control not seen at Anfield for a long time. From the first whistle were on the visitors with a great intensity and drive to win the ball back. They were also very good on the ball and utilised the spaces very well, particularly in the first half of the game.

A lot of this was down to the brilliance of young Trent Alexander Arnold and how he held the width for Jurgen Klopp’s side. You can see here in the first few minutes of the game the youngster is already influencing the game. Ahead of him, he had Liverpool’s four biggest goal threats and a lot of options. He can play the weighted pass to Oxlade-Chamberlain to get him in behind. The cross into the box to find Salah at the near post or Firmino at the back post. On top of that he can attack the space ahead of him too. He whips the ball into the near post and in reality, Mo Salah should have put it past Asmir Begovic. 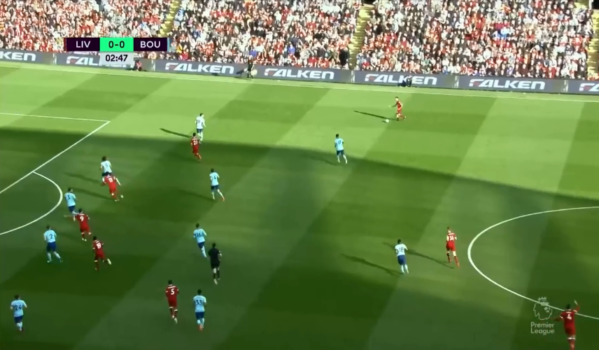 Bournemouth made sure that they had a very tight midfield so that Liverpool could not play their intricate link up play in between the lines. But this kind of system is not set-up for teams that want to get in behind. Because they are trying to keep it tight and be ready for a counter attack nobody is following the runners Liverpool have. As soon as the ball went wide Bournemouth were in a 4vs4 situation in the box and that is far from ideal for Eddie Howe’s side.

Just minutes before Liverpool’s 1st goal there’s another great view of Liverpool’s shape in the 1st half. You can see Henderson on the ball in and around the two centre-backs. He has a midfielder available in Chamberlain and on the far side, you can see Alexander Arnold waiting for the switch of play. Again you can see 3 Liverpool attackers floating in the space between midfield and defence too. 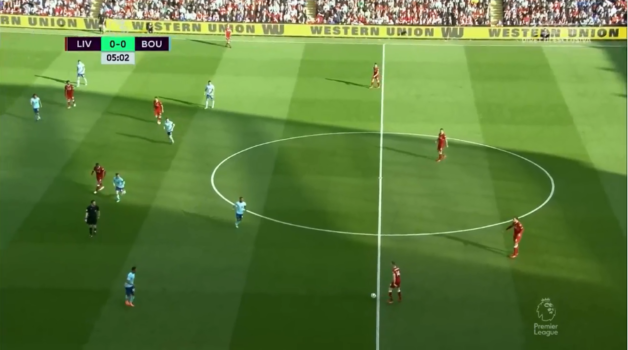 These kind of options are perfect for Henderson and gives him a lot to think about. Bournemouth are trying to stay tight in the midfield still but if Liverpool move the ball quickly then they are in a very similar situation to the previous image.

Liverpool’s 1st goal of the game is the perfect way to describe the start they made to the game and why they were so dominant over their opponents. In the 1st picture, you can see the ball has been recycled after a corner was cleared. You can see that the box is loaded with a lot of Bournemouth players and they have control of the situation. Suddenly Mohamed Salah draws players out to stop him driving into the box. The ball is worked out to the edge of the area where Liverpool have 3 open men. Bournemouth are now in a state of panic and hurriedly go to stop the cross from Jordan Henderson into the box. But they’re already in jeopardy. They go from 7 players in the box to just 4 in the space of a few seconds leaving a gaping hole for Mane to exploit. The Senegal international is way too good to not take that opportunity. 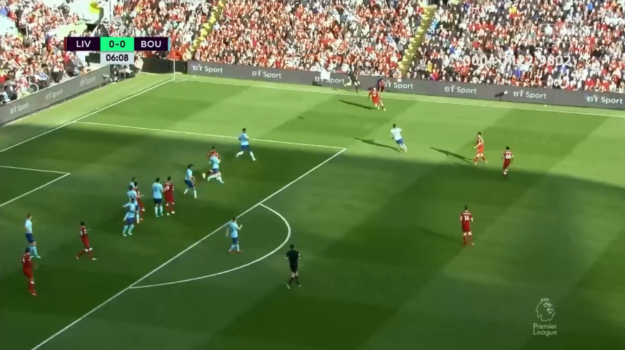 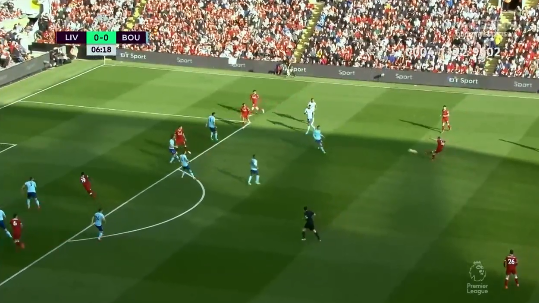 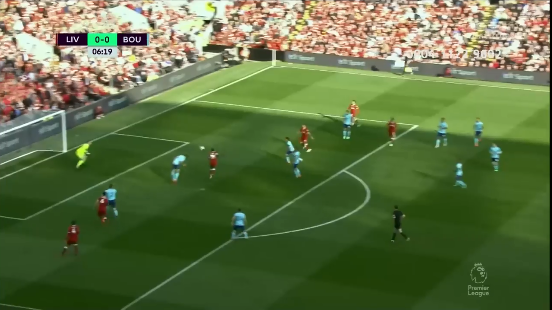 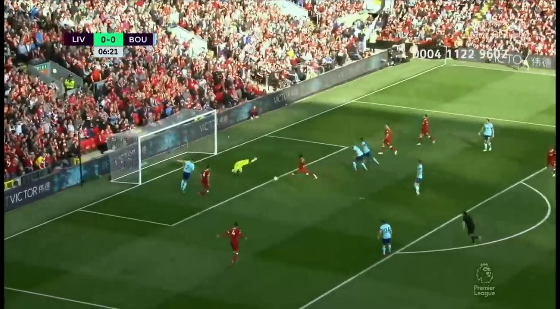 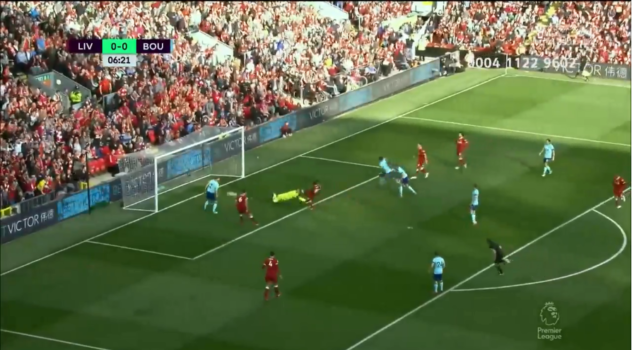 The moment Mane connects with the ball there are 6 Liverpool players in the box. They are all playing a part to distract the Bournemouth players. Mane’s initial header is parried by Begovic but none of the Bournemouth players are aware of the danger, because they have been dragged all over the box. Mane is able to gobble up the rebound and get the Reds off to the perfect start.

Moving the opposition around the pitch as fast as you are moving the ball is the key to breaking down a packed defence and Liverpool did that. Bournemouth had a very comfortable situation with so many defenders in the box. But because they did not set up their block quick enough, Liverpool capitalised. They should have immediately spotted Liverpool had two gifted passers free on the edge of the box and placed somebody ready to close them both down. They didn’t and faced the consequences.

Minutes later and Bournemouth had not learned their lesson at all: 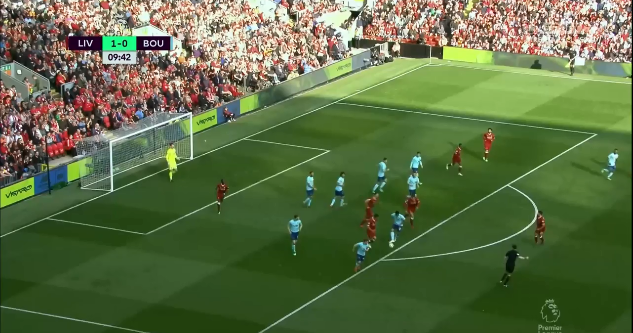 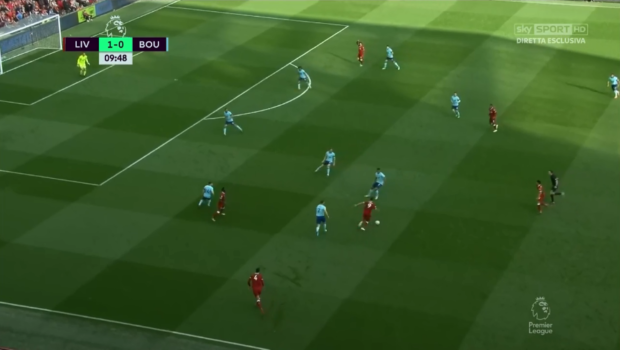 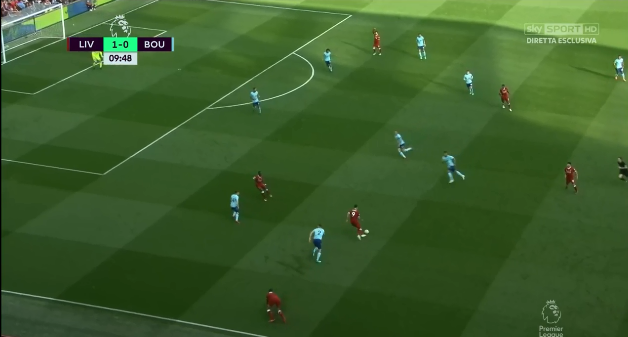 Bournemouth got a free-kick on the edge of the area. They were placed under a lot of pressure at the start. Instead of using it to soak up some of the pressure, take a break, rest. They decide to take a quick free-kick and get up the pitch quickly. Unfortunately, Virgil van Dijk and Roberto Firmino had other ideas. Within seconds of releasing the ball, they regain possession and they are in a promising position.

These kinds of pictures were the kind of thing that Liverpool were doing throughout the 1st half and even though they dropped the level in the second half they managed to score 2 more goals. If Liverpool can keep up this kind of tempo for the rest of the season Champions League qualification is almost a certainty and perhaps even a place in the final of said competition.

Hi! I'm Luke I have been a Liverpool supporter for a long time. I currently live in Beijing as an English teacher.