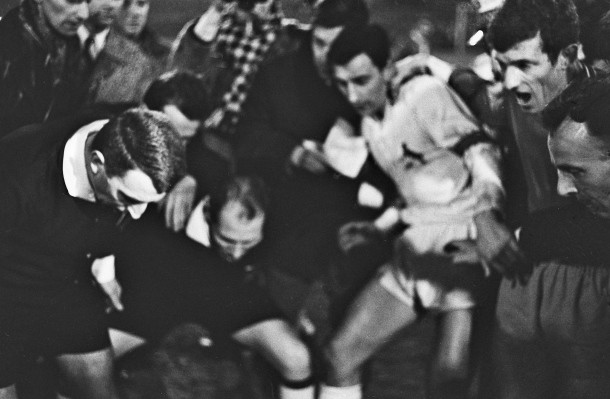 Of all the stories I’ve had the pleasure of hearing from my grandad, ex-Liverpool goalie Tommy Lawrence, there is one that sticks potently in the mind. It was the story about how Liverpool won the European Cup quarterfinal with a flip of the coin.

Before the days of penalty shootouts or the dreaded away goal rule, the only way to split two even teams was with a bit of lady luck! This is what happened when English titleholders Liverpool faced off against FC Koln, who had just become the first ever Bundesliga champions.

On the 10th of February, 1965, Liverpool travelled 575 miles for the first leg of the European Cup quarterfinals. It was one of the first European matches to take advantage of the advancements in technology. The game was aired live in seven different countries. It was billed as a champion of champions match and it was in its very essence a decider to see which of the two countries was better.

Although what followed was a goalless draw, it was a cracking game of football which really showed the defensive qualities of both teams. A rare commodity in the sixties. Even a return leg to Anfield seven days later couldn’t separate them. The teams were so evenly matched that over a total of 180 minutes neither of their goals had been penetrated.

With both games ending goalless a replay was ordered at a neutral ground. Rotterdam was chosen to host the final showdown of these two inseparable teams. The De Kuip stadium held a respectable 30,000+ (at the time). With a sense of excitement rippling through Merseyside, thousands of Liverpool fans followed their team for the first time to a foreign country. They were expecting to gain the bragging rights over their German compatriots.

The game started flawlessly for Shankly’s men. Ian St John opened the scoring on the 22nd minute with a team goal similar to that you would find at the Nou Camp, Barcelona. After a few one-two passes with his midfielders, Hunt continued his run and was met with a beautifully weighted through ball, thanks to Hunt’s selflessness and some clever movement from Motherwell born striker Ian St John, a well-worked team goal was made to look effortless.

Liverpool doubled their lead in the 37th minute with a Roger Hunt header which rattled against the crossbar before spinning into the back of the net. The passage of play before this wonderful goal proves that the beautiful game was well and truly alive in the sixties.

Given both teams’ inability to score in the first two legs, this lead was deemed insurmountable for the German champions. Yet, just three minutes after Hunt’s goal, Karl-Heinz Thielen shocked the reds with an insatiable header which flew into the far corner with a little help from the post, leaving my grandad helpless, face down in the mud. Georg Knopfle’s half-time team talk just got a little bit easier.

With the confidence of that goal just before halftime, FC Koln came out the better team. My grandad was still feeling pretty confident that day:

“They hadn’t scored in two games past us and that goal they just scored was a one-off. Tommy (Smith) and Ron (Yeats) were in great form. I was thinking there’s little chance of them getting past us twice”.

Unfortunately for my grandad, Hannes Lohr had other ideas. A loose pass from the by-line found its way to Lohr who with the outside of his foot rattled the ball into the bottom left-hand corner from 25 yards. Yet again my grandad found himself face down in the mud, helpless. This rounded off four of the greatest goals you’re ever likely to see in a game of football (if you don’t believe me, see for yourself).

A special mention to FC Koln player Wolfgang Weber for putting modern day players to shame. He sustained a horrific injury in the second half, breaking a fibula in the process. Unfortunately for his team, it was a full year before the substitutes rule took effect. So, without question, a broken-legged Weber hobbled on for almost the entire half, plus extra time.

With 300 minutes of football played and the teams still drawing, Belgian referee Robert Schaut had no choice but to reach into his wallet for the history-making coin toss!

Captain Ron Yeats came running to the referee shouting “Tails Sir!” With the call made, the referee flipped the coin then proceeded to hold back the apprehensive players. With baited breath 22 players followed the coin as it flew in the air. As it hit the floor a huge gasp could be heard “It’s only went and landed in a bloody divot” (with neither side facing up) my grandad recalled. Still, with a sense of disbelief half a century later he said: “Here we are in the quarterfinals of the European Cup and Ron and the ‘German lad’ are trying to blow the coin over onto their side, you couldn’t make it up!”

After looking like he was going to lose the battle, captain Yeats pleaded for the referee to flip it again. Thankfully for Liverpool, the referee agreed just as the coin looked like it was going to fall onto heads. The second flip was kinder for Liverpool, landing with the tails side facing up, sending them through to a semi-final match against then holders, Inter Milan.

What happened after the game can be described as one of the most unknown yet iconic (and comical) stories of the Liverpool manager and legend, Bill Shankly. While holding his laughter my grandad said:

“I remember talking to Ron after the game and he said: ‘Shanks came up to me and asked what I chose. I told him I picked tails’. I never forgot what Ron told me Shanks had said: ‘I would have picked tails myself laddie!’ Shanks just walked away with a grin on his face.”

So, there we have it, the day that a flip of a coin decided who would reach the semi-finals of the European Cup. FC Koln were knocked out of the competition without losing a game. Although it was a bitter pill to swallow, they are a part of an iconic European football match still being spoken about 53 years later.