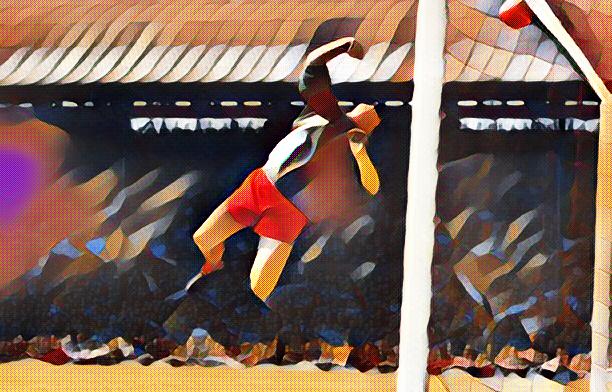 Upon signing for Liverpool on 1st December 1959 not many people could have foreseen the success that Bill Shankly would bring to Liverpool. Fifteen years and eleven major trophies later, Shankly retired as probably the greatest manager in the clubs storied history and maybe even one of the best ever. For all of the trophies and team glory Shankly brought to Anfield, what is rarely mentioned is the careers he nurtured. The young players who were either brought to the club by him from obscurity and the ones who were already there all owe a huge debt of gratitude to the great man for what he did for them. Some of them kicked the door open with their own ability, making themselves difficult to ignore. Others were brought in out of sheer necessity and were able to show just how talented they were. One man in particular falls into that bracket, revolutionising goalkeeping in this country in the process. That man is Tommy Lawrence.

Thomas Johnstone Lawrence was born in Dailly, Ayrshire, on 14th May 1940. He would grow up supporting Ayr United but would move to the north west of England as a child. Upon leaving school he worked in Rylands Wire Factory while playing part-time for Warrington Town. It was while playing in England’s amateur leagues that he was spotted by Liverpool manager Phil Taylor. He quickly snapped up the 17-year-old Lawrence and sent him to Liverpool’s reserves to mature. It was clear that Lawrence had everything physically. He cut a bulky figure in goal and was hard to beat in any battle. Yet he was young and Taylor preferred to stick with the seniority of Doug Rudham and Tommy Younger. Bert Slater and Jim Furnell would also see off the challenge of the young Lawrence.

With Liverpool languishing in Division Two for the fifth consecutive season under Phil Taylor in 1959/60, the board eventually decided to dispense with his services. The search for a manager was on and Bill Shankly was eventually given the job after at first turning it down because he wasn’t given assurances over control of the transfer policy. The Liverpool board relented in the end and thank the lord they did. After steadying the ship in his first season, Shankly led Liverpool the to the Divison Two Championship in 1960/61. Jim Furnell was now first choice ‘keeper and Bert Slater remained his back up. At the beginning of the 1962/63 season Shankly let go of Slater and promoted Lawrence to the first team. He made his debut on 27th October 1962 after Furnell picked up an injury. “You’re playing tomorrow son. It’s there, you can do it, take it,” were Shankly’s simple words to his understudy goalkeeper the day before his debut. It was a losing debut, as The Reds went down 1-0 to West Bromwich Albion. However Lawrence had obviously caught the eye, as Furnell would not regain his number one shirt.

After waiting five years for his debut Tommy Lawrence instantly became a fan favourite. Known for his consistency and stature, The Kop would christen him the ‘Flying Pig’. He loved acrobatic saves but didn’t really have to make them as his positioning in his goal was fantastic. With a defence in front of him marshalled by the gargantuan presence of Ron Yates, Liverpool were becoming a force. If the ball did manage to breach the red wall in front of Lawrence, he would come out of his goal himself to clear the ball. Many credit him for being the first sweeper-keeper these shores ever saw. It was a tactic which Lawrence said was spawned during five-a-aside games. “We’d play five-a-aside in training and the boss said to me “you know the way you’ve been playing in the five-a-side – coming out of your goal, and tackling, and clearing everything. We’re going to try something this week.” And I was told to play outside my 18-yard-box. At first I had 30,000 Kopites behind me shouting, “Lawrence, get back in your goal!” But we conceded less goals than anyone.”

Lawrence’s claim as Britain best stopper was strongly backed up eighteen months after his senior debut when Liverpool won the league for the first time since before the Second World War, in the 1963/64 season. The 1964/65 season saw more success. Liverpool had never won the F.A Cup before, having been beaten in the final by Burnley in 1923 and Arsenal in 1950. This season though Shankly would have the honour of leading his side out at the Wembley showpiece against Don Revie’s all conquering Leeds United. Things didn’t start well when Gerry Byrne broke his collarbone in the first half and was forced to carry on due there being no substitutions in those days. The valiant Byrne would set up Roger Hunt to put Liverpool 1-0 up, but Billy Bremner would equalise sending the game into extra time. Ian St. John would ultimately core the winner in extra time and Liverpool had their first F.A Cup. It was a surreal moment for Lawrence but one which had another funny Shankly story to go with it. “Liverpool had never won the cup before. When the whistle went, I could only say, “We’ve done it! We’ve done it!” I went down on my knees’s and got back up again. After the game I’d had a few drinks and I had the bottom of the cup. A few hours later we were back at the hotel and I could hear Bill’s voice. “Which room is he in, Bob (Paisley)? Which room is Tommy Lawrence in?” There was a knock at the door and he was stood there. “Where’s the bottom of the cup, Tommy?” I said, “I don’t know boss. I’ve not got it now.” He turned to Bob and said, “That’s it Bob. The first time we’ve ever won the F.A Cup and he’s lost it!”

Tommy Lawrence would stay at Liverpool for another five years, winning two more league titles during that time. Towards the end of the 60’s Bill Shankly began to break up his ageing squad. Breaking point for this great side came at Vicarage Road in the quarter-final of the F.A Cup. Watford were a Second Divison side and should have been dispatched of with ease, yet they walked in the semi-finals as 1-0 victors. That game would the penultimate one Tommy Lawrence would play for Liverpool, as he, Ron Yates, Ian St. John, Gerry Byrne and the great Roger Hunt would soon leave the club. Lawrence was replaced by the younger Ray Clemence and soon made the short trip across the Mersey to play for Tranmere Rovers. He would stay at Prenton Park for four years under old friend and player/manager Ron Yates. He played eighty times for Wirral side before retiring in 1974 after a short stint at non-league Chorley.

After retiring Tommy Lawrence spent the rest of his days in relative anonymity. He preferred to spend time with his family and wife, Ellie. He shunned the opportunities of punditry and coaching, instead choosing the quiet life. That was until a February afternoon in 2015, when he was asked if he remembered a Merseyside derby from 1962 by a BBC reporter with a camera. “I do – I played in it.” It was an extraordinary moment which seemed to catch everyone off-guard, including Tommy himself. It was his last recorded public appearance before his death this week.

Bill Shankly once said that Tommy Lawrence was so cool he wished he could “take a deckchair onto the pitch with him and, when the ball came to him, pick up the ball, clear it, and sit back down in the deckchair with a cigar.” That picture perfectly described the man and the player. Who would have known on the cold, February afternoon that the ordinary people of Liverpool were walking amongst a humble man who had done extraordinary things with his fourteen stone frame – three league titles, one F.A Cup, three Charity Shields, 390 senior Liverpool appearances and, unjustly, three Scotland caps. Many people may not be aware of Tommy Lawrence but, rest assured, he is one of the greatest players to ever pull on a Liver Bird emblazoned shirt.