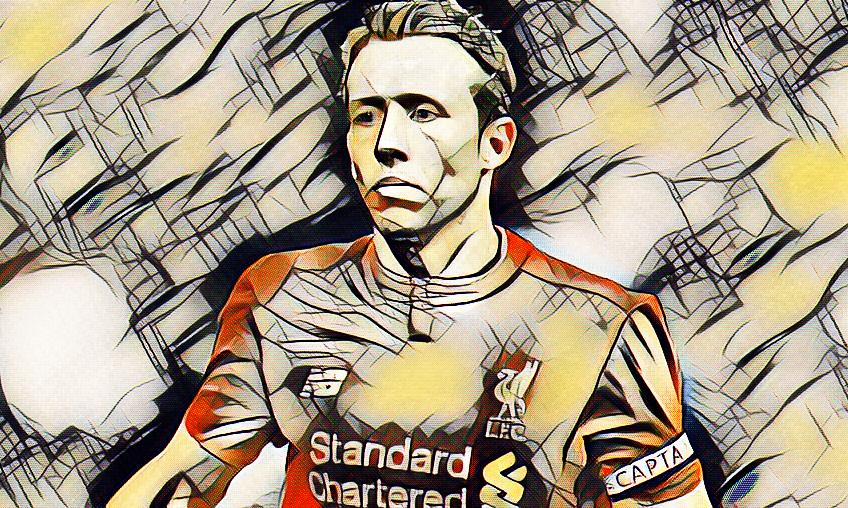 Lucas Leiva breezed into Liverpool in July 2007 from Gremio. Rafa Benitez had been after the 21-year-old Brazilian for the best part of 6 months and finally managed to snag his man for £5.5 million. At the time, Lucas was a young midfielder who was in the midst of making the switch from all action number 10, into tough tackling number 6. It’s hard to imagine Lucas as an attacking midfielder now but his most notable performances for the Brazil under-21’s came in that role. When he did drop further back the pitch though, that was when he shone. After selling Mohamed Sissoko to Juventus, Benitez had initially loaned Javier Mascherano for 18 months but he still needed a back up to the Argentine. A young Brazilian was perfect for the role.

In his first season at the club it was clear that Lucas was some way off the finished article. He struggled to handle the pace and tough nature of English football. For a defensive midfielder, you would think that there would not be much down for young Lucas. But the raw materials were there. Although he wasn’t a tough tackler like Mascherano, he offered a greater range of passing. He also proved that his struggles with the nature and speed of the Premier League were not through a lack of desire or ability, but due to physical development. He could move across the pitch quicker that Mascherano, he just needed patience and some more time in the gym. The Liverpool fans gave Lucas a seasons grace. After all, he was only a kid. The sight of his long, sandy blonde hair dancing around Anfield wasn’t a regular one anyway, so it was not fair to make a judgement based on one season.

The following season was not a highlight for Lucas. He made 39 appearances in all competitions but the fans were running out of patience. The 21-year-old was making rash decisions and clumsy tackles. The fans excused him due to a lack of experience during the first-half of the season. In January 2009 Liverpool played Wigan Athletic at the JJB Stadium. With 10 minutes left and Liverpool ahead, all the reds had to do was hold on in order to maintain the pressure on league leaders Manchester United. But Lucas gave away a needless penalty after committing a silly foul on Mido. After Wigan equalised from the spot, some Liverpool fans had had enough of making excuses. Many called for his head. But Benitez’s faith didn’t waiver. He continued to play Lucas as an orthodox defensive midfielder and a deep lying playmaker. In essence, he was a back up to both Xabi Alonso and Javier Mascherano. We would certainly reap the benefits of a player who was becoming a midfield chameleon.

Upon the sale of Xabi Alonso to Real Madrid in 2009, Alberto Aquilani was brought in from Roma. Aquilani would spend the first 3 months of his Liverpool career on the sidelines due to injury, so someone was needed to play alongside Javier Mascherano. With Steven Gerrard still providing a devastating foil to Fernando Torres, there was little chance of him dropping into the role despite the fact he was probably best suited to do so. With that in mind, the job was given to Lucas. The young Brazilian was certainly not the answer to the problem left behind by the departure of Alonso. While he did have a decent range of passing, it was nowhere near the standard necessary to be an effective deep lying playmaker and definitely not to the standard of the stupendous Spaniard. But Lucas would somehow regain the trust of the fans. Liverpool had a poor season which most blamed on the clubs inability to suitably replace Alonso. People began to feel sorry for Lucas for being parachuted into a role he wasn’t suited to. He tried to bring something different to the role – instead of being a sitting midfielder, he tried to maraud around the pitch and offer a more dynamic option. By time Aquilani had regained fitness, the writing was on the wall for the Italian. He struggled tremendously in English football and Lucas made the place his own. In 2010/11, Lucas would really come to the fore.

With Rafa Benitez having been sacked and Roy Hodgson taking over, it was a time of major upheaval at the club. Barcelona capitalised on the uncertainty to unsettle Mascherano. The Argentines head was turned and he was soon on his way to Catalonia. Liverpool bought Christian Poulsen to replace Mascherano, but they had a ready-made replacement in Lucas. Once it was clear that Poulsen wasn’t up to the job, Lucas began to play much more often. When Kenny Dalglish replaced the flailing Hodgson in January 2011, Lucas was joined in midfield by Jay Spearing. Spearing would eventually be a back to Lucas, who was starting to cement his place as one of the most underrated midfielders in the Premier League.

2011/12 was going to be massive for Lucas. He was now a mainstay in a team that was promising so much. With Steven Gerrard dropping deeper in midfield, Lucas Leiva was able to chase around and do the captains running so he could pull the strings. Lucas recovered the ball, Gerrard sprayed it. At first, it worked wonderfully. Lucas’ energy was perfect for the role he was being asked to play. It was also starting to look like Lucas could become a better player than his predecessor, Mascherano. He was a better passer of the ball and seemed more dynamic. He had become a fan favourite. Then, BOOM. In a game against Chelsea in the League Cup at Stamford Bridge, Lucas twisted his knee. It seemed innocuous but you know as a football fan that they are the worst ones. The next day it was confirmed – Lucas had torn his medial cruciate ligament and would be out of action until the new season. It was a massive blow. He had become an integral part of how we played and it was obvious we would miss him.

Between 2012 and 2017, Lucas’ career would become mostly about staving off injuries. They took a toll on him. He lost the dynamism that won him over with the fans. He could no longer move about the pitch as quickly as he used to. He couldn’t really play in a run of games no more. He adapted his game and became a much more considered defensive midfielder. He tried to break up attacks and play simple balls. He worked on improving his positioning so he could read the game better. He succeeded in this and made a higher number of interceptions as opposed to actual tackles. His reading of the game became so good that Jurgen Klopp tried to move Lucas into centre half as a defender who could bring the ball out. But he was never the player he had been before that night at Stamford Bridge.

Liverpool fans loved Lucas nonetheless. He had developed cult hero status on the Kop. Everyone sympathised with him through his injuries. Liverpool fans also loved the fact he had managed to win them back after a relatively poor start to his career at Anfield. There was a point where he was nearly hounded out the club but now here he was, our starting holding midfielder and a massive miss when he wasn’t in the team. He showed character, stubbornness, and determination to show everyone that they were wrong. I think most Liverpool fans enjoyed having this one shoved down their throat.

Lucas also managed to endear himself to everyone off the pitch. It was no secret that he was popular with the South American contingent in the dressing room. Stories came out of the club detailing how Lucas would welcome the new South American players and show where they could get home comforts in the city, or he’d organise get-together’s in his house for their families to help them settle. He had become a leader in the dressing room and a favourite in the stand. Who can forget the prank played on unsuspecting customers to the Liverpool One club store, when Lucas and Jordan Henderson donned horrific disguises to fool customers? Lucas’ now infamous “unlucky” quote is probably one of the most used memes a Liverpool fan will see. My favourite Lucas moment came after the Merseyside derby at Anfield in April of this year. Walking back into the dressing room after beating Everton 3-1, there is footage of Lucas high fiving someone in the tunnel and shouting “YES LAD” in a strange Scouse/Brazilian hybrid accent.

These moments sum Lucas up perfectly. He was one of the foreign players that the club really touched. He never turned into the player that he could have been – he could have been one of the best defensive midfielders in the world if it weren’t for the knee injury in 2012. But the club and the fans stood behind him after that injury and he repaid us. He never let the team down and you always got the feeling that he had adopted the city as his home. His number of games had become restricted certainly over the last 2 seasons. It was no great surprise when he moved to Lazio last month in the search for more regular game time. It may be a bit far to say Lucas was a legend, but he was certainly a cult hero and will be remembered on the Kop for a long time.