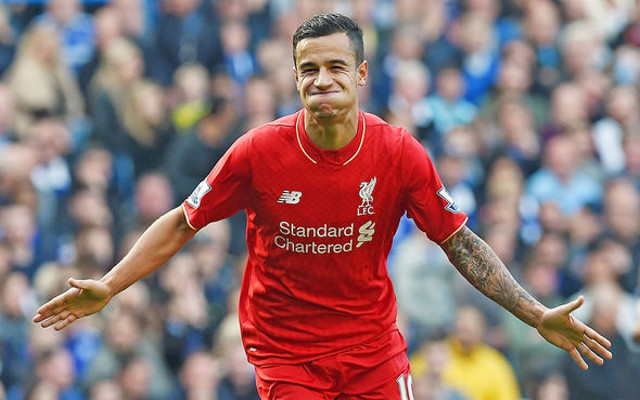 Three hours. It doesn’t seem a very long time, does it? It’s a flight from Liverpool to Bulgaria. It’s two football matches without any breaks. It’s two full episodes of Match of the Day. 180 minutes. Not a long time at all. But that’s all it took for Philippe Coutinho to take his Liverpool career to the brink.

The Phil Coutinho transfer saga has been a bit like the movie, The Butterfly Effect. All it took was for one event the other side of the continent to set off a chain of resulting events. The transfer of Neymar to Paris Saint Germain for a world record £194 million sent the Barcelona hierarchy into panic mode. They hadn’t anticipated that Neymar would actually leave. In their complacency, they had failed to formulate a contingency plan. Now they needed to replace him and it needed to be big. They had received a massive sum for Neymar and the whole of the world now knows that Barca have nigh on £200 million burning a hole in their sky rocket. But who would they go for? With that much money and the allure of playing for one of the greatest teams in the history of modern football, surely they’d have their pick of the world’s elite.

Back on Merseyside, questions had already been asked earlier in the summer regarding the future of Liverpool’s number 10. He had gone some way to silencing those questions when he signed a new 5-year deal in January. But that hadn’t put off Barca. At first, they took the hint. Coutinho wasn’t for sale, end of story. Then Neymar went and they changed their tune. They became hell bent on securing Coutinho’s signature. It needed to be big, remember. Coutinho would be big, especially for around £73 million.

It started off so well. Liverpool rejected the bid within half an hour of receiving it and publicly proclaimed that Coutinho was not for sale. Reports were coming out of training that Coutinho’s attitude was first class. Apparently, he wouldn’t turn down the opportunity of moving to the Nou Camp if it presented itself, after all, who would? But he wouldn’t agitate for a move either and wanted any deal to be done “amicably”. His words if you believe the source. When Barca sent officials to Liverpool this week to close a deal and carry out a medical, they looked stupid. What were they playing at? It was becoming embarrassing for the Catalunyan club. They were acting like a mistreated wife who was carrying on as if nothing had happened after receiving the beating of a lifetime from her husband. It seemed that the level of delusion was becoming worrying for Barcelona fans. Then it kicked off – big time.

On Friday morning, around 11 a.m., on the eve of the first game of the season, FSG released a statement saying that Coutinho was priceless and would not be sold this summer. Liverpool fans worldwide rejoiced. Our owners were again standing up against player power, as they had done with Luis Suarez in the wake of Arsenal’s disrespectful £40,000,001 bid in the summer of 2013. With Coutinho not pushing for it and the owners not budging on it, surely Barca would take the hint now. Surely they’d piss off and just sign Dembele so we could all breathe a massive sigh of relief and look forward to smashing Watford. What happened next was a shock.

Around an hour later he handed in a transfer request.

But he wasn’t pushing for a move. But he wanted a deal done “amicably”. But his attitude and performance in training has been first rate. How has it come to this? It makes no sense. We are less than 24 hours away from the opening game of our season and our best player, our talisman, our little magician, has turned on us.

Things only got worse though. What came next turned bewilderment and shock, into anger and disgust. If he had just handed in the transfer request then many people would have handled it, we might have even understood. But a “close family member” was leaking information to the press. Apparently, he wasn’t happy with the manager. Apparently, he didn’t like being played in different positions. Apparently, he had not finished enough games and that upset him. It was feeble excuse after feeble excuse. It was absolutely pathetic to blame this petulant act on the manager. Klopp has protected Coutinho from this all summer, allowing the player to train in peace without having to defend himself in the press. He played him positions last season that benefitted the team and Coutinho excelled wherever he played. Keeping your best player fresh for important games, especially with a squad short of strength in depth, is to be expected. I can understand him not being happy at not finishing games, you don’t expect players to be happy at being substituted, but to use it as a stick to beat the manager with now was pathetic.

Coutinho had handled himself with such class. He had conducted himself throughout this summer with dignity and was gaining even more admiration from fans. Liverpool supporters are not stupid. We understand that when Barcelona come calling then it is an opportunity that is hard to turn down, especially for South American players. All we wanted from Coutinho was one more season. All we wanted was for him to understand that asking to leave at this stage of the transfer window was unreasonable. All we wanted was Coutinho to just give us a year to find a suitable replacement – there are players out there who can replace Coutinho. Unlike when we sold Luis Suarez, we will be just fine with the correct replacement. If he would give us this season than most Liverpool fans would wish him good luck and say, “Felicitaciones on your new job lad. Have a belter one in Spain.” Anyway, in a year’s time, Andres Iniesta’s contract with Barcelona will be up and he has already said he doesn’t know if he will sign a new one. Coutinho is the ideal player to replace a bursting, dribbling, creative central midfielder like Iniesta. Not a pacy, goal scoring winger like Neymar. The only party who benefits from Coutinho moving to Barcelona now is Barcelona.

But, in three short hours, he forfeited any right he had to our understanding. On the eve of our season he turned on us. We would have been behind you Phil. You have seen the support we have given to players who have done right by us in the past and left. Suarez left after giving us one more season and is still revered. Gerrard left after giving us 17 years of his life and is a club legend. The first sign of a club sniffing around and you turn on the manager to get what you want. Pathetic.

Of course if Coutinho accepts the current situation – that he isn’t for sale at any price this summer – and stays at the club, then all will be forgiven. We will get on with the season and, if Coutinho goes next summer, then he will be remembered in the same way Luis Suarez is. But it really is disappointing that he has acted in this way. It was refreshing to see a player not exert any power he had to force a move. It was nice that it was a Liverpool player who was acting in such a classy manner, not letting the speculation around him affect his training or focus on the season ahead. In 3 hours on the day before his teams’ first game of the season, Philippe Coutinho may have just stained his Liverpool legacy.