Left-back has been a major talking point over the past couple of seasons seeing Alberto Moreno and James Milner unable to seal their spot in the first team. Liverpool have turned their attention to Hull defender Andrew Robertson whom they might be able to secure on a cut price deal after Hull’s relegation last season. This signing might be a little tougher than expected as Hull have already sold Harry Maguire and Josh Tymon to Leicester City and Stoke City respectively, so moving on another defender will deplete the squad further.

Andrew Robertson will be a signing which will give Liverpool with a natural in the left-back slot as both Moreno, who started at Sevilla as a winger and James Milner, who is predominately a central midfielder are simply stop gaps. Andrew Robertson has been a regular in the Hull setup, starting the majority of Hull’s games last season. Andrew Robertson is only 23 which will see him stay at Anfield for the forcible future.

What kind of a player is Andrew Robertson?

As mentioned Andrew Robertson is a left-back who is fairly attacking minded, and similarly to Moreno, can also play a part if the Reds were to opt for a three at the back system with wing-backs. In the 31 (2) games he played in the league, he scored one goal and created two assists. These aren’t great numbers but we have to remember that he was playing for a Hull side who did go down. I do think he will be an improvement on James Milner as he is left footed which means that he won’t shift to his right when delivering balls into the middle and as he is much younger, he will have more pace and stamina than ageing James Milner.

Andrew Robertson might have a big role to play in the Liverpool side if he is signed because of how attacking minded he is and how well he will link up with Coutinho. We did see Coutinho play some of his best football early on in the season when there was a fully fit James Milner readily running beyond for the overlap and I just feel that now with a natural left sided wing back he can revive some of that form he had early on in the campaign.

A standout aspect of Robertson’s game is his passing. He isn’t just a left-back who bombs forward and delivers the odd cross, he can also play a bit. In my belief this is quite essential to how Klopp’s teams play out as most of the time we see that James Milner is the player on the pitch how receives and makes the most passes, which is also why he said in an interview once, “Playing left-back in Jurgen’s team is different to playing left-back for any other team.” What Milner meant by this is left-back in Liverpool’s system is just like another midfielder with a number of passes you make and how further forward you get. 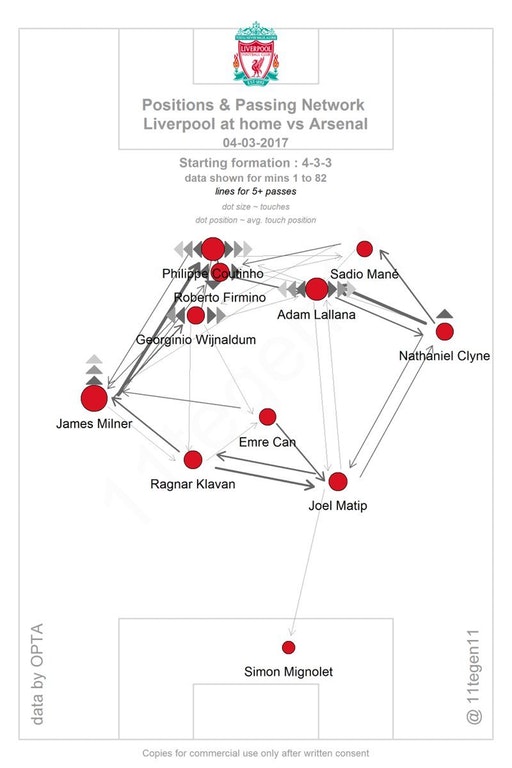 This pass and position map clearly indicates that James Milner made the most passes against Arsenal in their 3-1 victory at Anfield. Being a wingback, one of the most important parts of your game is crossing and Andrew Robertson is able to deliver crosses really well. This again is crucial to Liverpool as with veteran James Milner, who is right footed, and hence takes an extra touch to bring the ball to his preferred foot which makes it a little easier for the defending teams to get back in position. Andrew Robertson will also bring pace to the side which is the way Liverpool like to play and hit teams on the counter. Robertson likes to play one-twos with the winger on the flank or a midfielder down the center this is what Coutinho will strive under as we have seen how well he links up with the wingbacks for the overlap. Andrew Robertson is strong in the tackle to which is necessary when defending and this is the main area where Moreno was criticized and I feel with Andrew Robertson he can add another string to our bow. His physicality will also bring something to the Liverpool backline which Milner and Moreno were unable to add.

Andrew Robertson was one of the better players at Hull will his promise and potential defeat the experience and sheer games of James Milner?