Liverpool faced a very organised Southampton side at Anfield. Southampton played with a 1-4-2-3-1 formation but without possession their shape was going to change to a 1-4-5-1 with a deep defensive line. 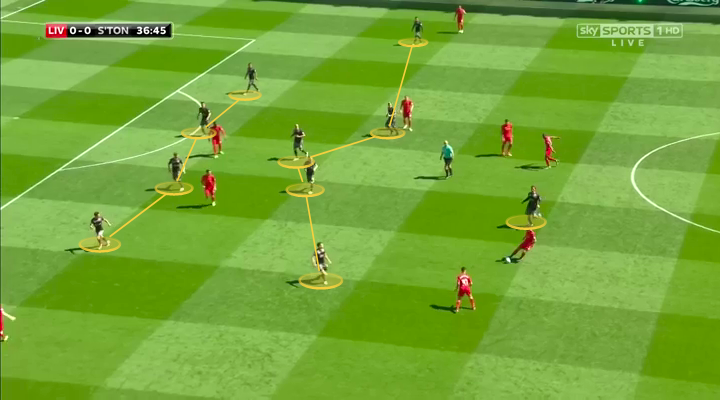 Liverpool used their usual 1-4-3-3 formation having an overall possession of 65% throughout the match, but, as we know, possession does not win matches unless it is used wisely.

Southampton were a solid and compact defensive unit leaving minimal gaps in zone 14 by overloading this area of the pitch. This was going to be a big challenge for Liverpool. 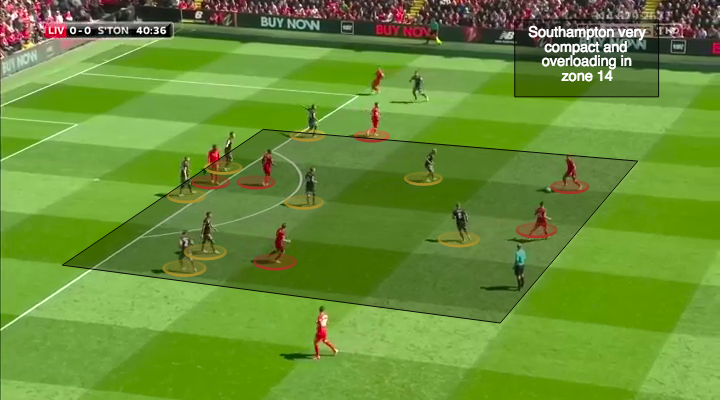 To resolve this challenge, Liverpool needed to execute to perfection the basic attacking principles of football: 1. Create Space; 2. Maintain Possession; 3. Exploit Space. These principles are based on movement off the ball, quality of passes, decision making, high tempo of play, stretching the opposition, changing the direction of play, and creativity. However, Liverpool failed to deliver these crucial points against Southampton.

NO WIDTH IN FINAL THIRD

Liverpool’s FBs (Milner and Clyne) were constantly pushing forward into high positions on the field to support the attacking plays, but they were often caught in positions not providing enough width to Liverpool’s attack by making runs to inner channels instead of trying to stretch Southampton’s defensive unit by staying in wide channels, as you’ll see in the following video.

Decision making is imperative in winning matches, especially, when playing against solid defensive teams who will try to deny available passing options. But the decision has to be accompanied by the quality of passes; poor execution will lead to failure.

Liverpool were unable to take advantage and exploit the spaces left by “The Saints” because their overall decision making, quality of passing and creativity in the final third was very poor.

Having players on the pitch such as Coutinho, Firmino, Origi, Lallana, and Sturridge; to name a few, one could be excused for thinking of attractive football. However, Liverpool’s lack of width, quality of passing and decision making in the final third were the key reasons we saw Liverpool as completely sterile and drop points at Anfield, despite having control of possession during the match.

22 matches played and Liverpool have so far accumulated 57 points, accompanied with just one defeat. However, Brighton were no pushovers as Saturday’s match proved. Going into the game all the pressure was on the visitors. Liverpool having enjoyed a clean sweep of wins in December and unbeaten in the Premier League going into 2019, […]

Anfield, Liverpool – Only four days after getting a crucial victory away at Hoffenheim in the Champions League playoffs, Liverpool played host to bogey side Crystal Palace. There were very few teams who could match the London side’s impressive record against the Merseysiders coming into this clash. In fact Palace had come away from their […]

The Premier League is finally back and Liverpool started their 2017-18 campaign on the road at Vicarage Road facing Watford. This match was not only special for being the season opener for The Reds but also because it was Klopp’s 100th match as Head Coach of Liverpool. Last time The Reds visited Watford for a […]