Thursday, 25th May 2017 saw the anniversary of one of the most famous nights in the history of Liverpool Football Club. It was 40 years since The Reds overcame Borussia Mönchengladbach in Rome, to claim their first European Cup. The match, which coincidentally shares the date with Liverpool’s most recent European triumph in 2005, was celebrated at the Hilton Hotel in Liverpool. Fans were invited to celebrate and share the evening with four players who played in the 1977 final, Phil Neal, Terry McDermott, Joey Jones and Ray Clemence. The event, which was hosted by the ‘Voice of Anfield’, George Sephton, gave fans a chance to meet with the legends, pose for photos with THAT banner and a replica European Trophy, as well as enjoy a meal and take part in a charity auction to raise money for the #saveourkatie campaign.

One of the main attractions from the evening was the original Joey Jones banner, probably the most famous banner in the club’s long history. A replica is currently used at Anfield but Jones, who owned it himself for 20 years, returned it to the club for a rare public appearance. The Welshman became a fans favourite during his time on Merseyside which was mainly down to his relationship with the people of Liverpool and his character.

“I think as much of that banner as I do the winners’ medal,” he said. “Phil Downey and Jimmy Cummings, who has sadly passed away now, they made the banner. When I saw it at Rome, I couldn’t believe it. There are so many famous players in the Liverpool team, the other 10 were household names. To have a banner, it certainly wasn’t for my skill! It made me feel 10 feet tall.” 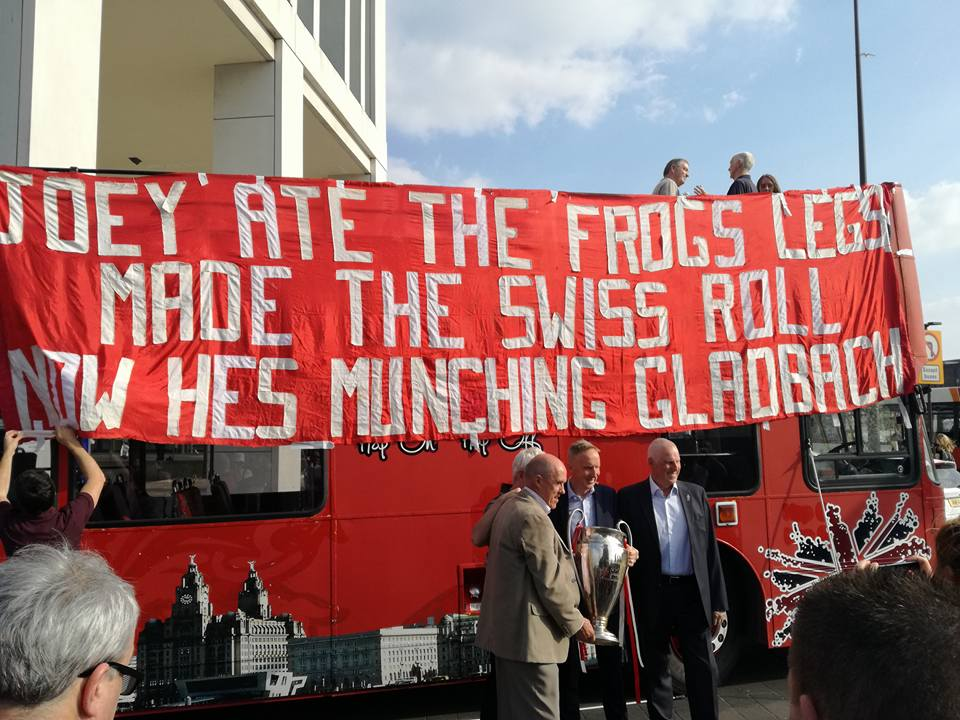 “I had the banner at home for more than 20 years, because when I left Phil and Jimmy actually presented it to me. I had it wrapped up in the garage.”

The four players took part in a Q&A session, which was led by Sephton, but there was also an opportunity for questions from the crowd. There were a few recurring themes when it came to the player’s answers. For instance, they kept referring back to the importance of the fans on that night, and how the presence of a so-called ‘twelfth man’ helped to inspire them over the line. Ray Clemence explained that the win wasn’t for the players, but was instead for all the fans that had made the long journey to Rome. “We were expecting 11,000 fans there,” Clemence said, “But there wasn’t, there were 26,000. We just thought ‘how can we lose this game?’ So many people had made so many sacrifices, we’ve got to perform.”

That sentiment was shared by Phil Neal, who described his conversation with Stevie Heighway, once the players had returned to the dressing room after a pre-match pitch inspection. “Stevie said we’ve got to win it for the people in red there. There are miles more in the stadium than Mönchengladbach supporters.”

While there was a lot of praise flying around for the supporters and manager, Bob Paisley, there were many compliments given to goalkeeper Ray Clemence, with Sephton describing him as “the best”. Clemence’s teammate, Neal explained, “Ray made two fantastic saves when it was 2-1. They were really important in a European final.” The saves obviously gave the rest of the players a confidence boost and acted as an inspirational catalyst which led them to push on and eventually run out 3-1 winners. Heaping even more appraisal onto the goalkeeper, Neal said “When Clem made those saves we believed then – we could win this. That led us to go on and win this.” With so much acclaim given to goal scorers, along with Liverpool’s current issues between the sticks, it was nice to see so much admiration given to a true Liverpool legend.

At the other end of the pitch, Terry McDermott talked the crowd through his strike which gave The Reds an all-important 1-0 lead. He explained that the Mönchengladbach defenders, especially the captain, Berti Vogts, paid so much attention to Kevin Keegan to ensure that he didn’t score, there was plenty of space for the other forwards to run into. “I was running through the middle and I couldn’t believe the space I was in.” He then played down the quality of the finish by simply saying, “It wasn’t [technically] a great goal, it was a good goal but it was great because of the importance of the match.”

It was then Phil Neal’s turn to describe his mark on the scoresheet. The penalty in the 82nd minute, which was won after Keegan was felled in the box by Vogts, took the scoreline to 3-1 and gave Liverpool an all-important cushion to comfortably see out the rest of the game. Although the ball ended up in the back of the net, Neal wasn’t as cool and collected while taking the penalty as you might think. “I’m running up to the ball,” Neal said, “and I’m thinking, he’s seen the one against Zurich, I better change my direction. And I did. You shouldn’t really do that and I did. Thank goodness it went in.” While facing up against the 6’4” Wolfgang Kneib, Neal assured that his thought process was to just “keep it low”. He proceeded to roll the ball along the floor into the bottom left corner, as Kneib dived the opposite way. 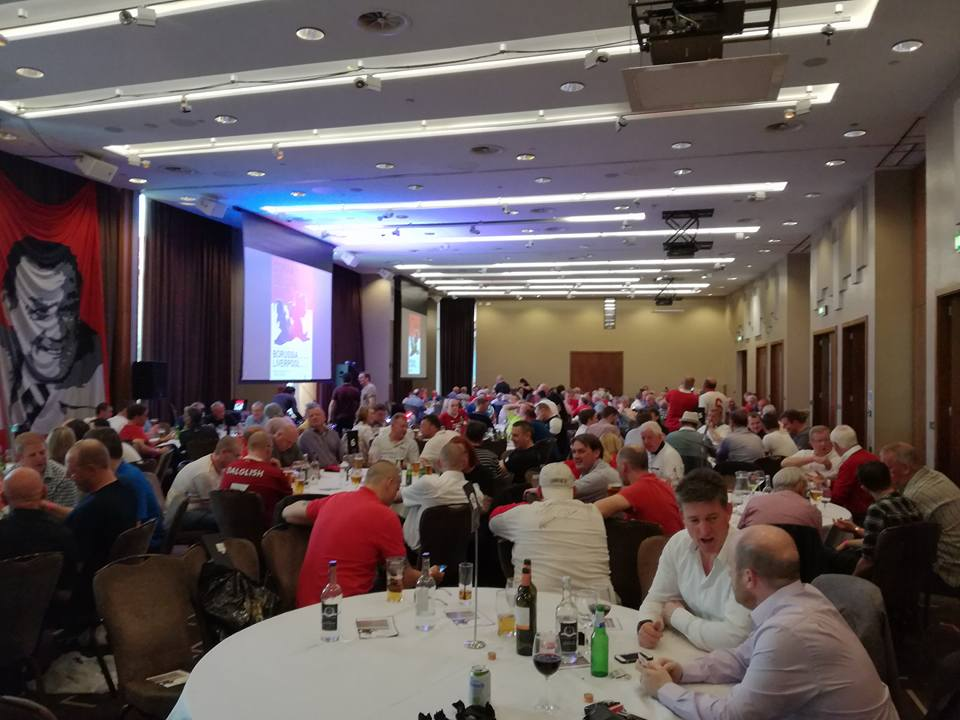 Each of the players present stayed with the club to win the competition again the following season. These were the only two European Cups that Joey Jones won, but both McDermott and Clemence won three, while Neal went on to pick up four. However, they all agreed that, although they’d played in better games and won more trophies, that this was definitely the most special victory. Clemence summed it up by explaining the pre-match thought process of some of the players. He said “This was a prize this magnificent club had never won before and this was our chance to make history. Other teams have won it since, but we were the first, and when you’re the first, it is the best.”

Not all the stories given by the players were serious and it was clear to see that, even after all these years, they are still very good friends. There were plenty of jokes, especially towards McDermott regarding his off-field antics. The crowd were treated to an exclusive, as the backstory behind Keegan’s infamous black eye was revealed. Neal started off by talking about the celebrations after the match and he said, “We were all around the pool area and Keegan, he’d got a bruised eye.” This led the ‘more-refreshed’ section in the crowd to begin chanting Jimmy Chase’s name. The way the story was told in the press was that Chase or Tommy Smith had hit Keegan after an argument about the latter leaving the club. Neal took great delight in informing the crowd that this was not the case. “You can be misled,” the former fullback said, “the boys are throwing people in the pool. I’ve said look, Kevin, I’ve got some expensive shoes on, let me kick my shoes off. He grabbed me because I was the next one into the pool. Anyway, I’ve flicked out and his eye went boom, so I’ve caught him. He came home to the tour round Liverpool and all the thought of the press were that Tommy Smith’s given him one…no, it was me!” The conclusion of that tale was met with a tremendous cheer and raucous laughter. 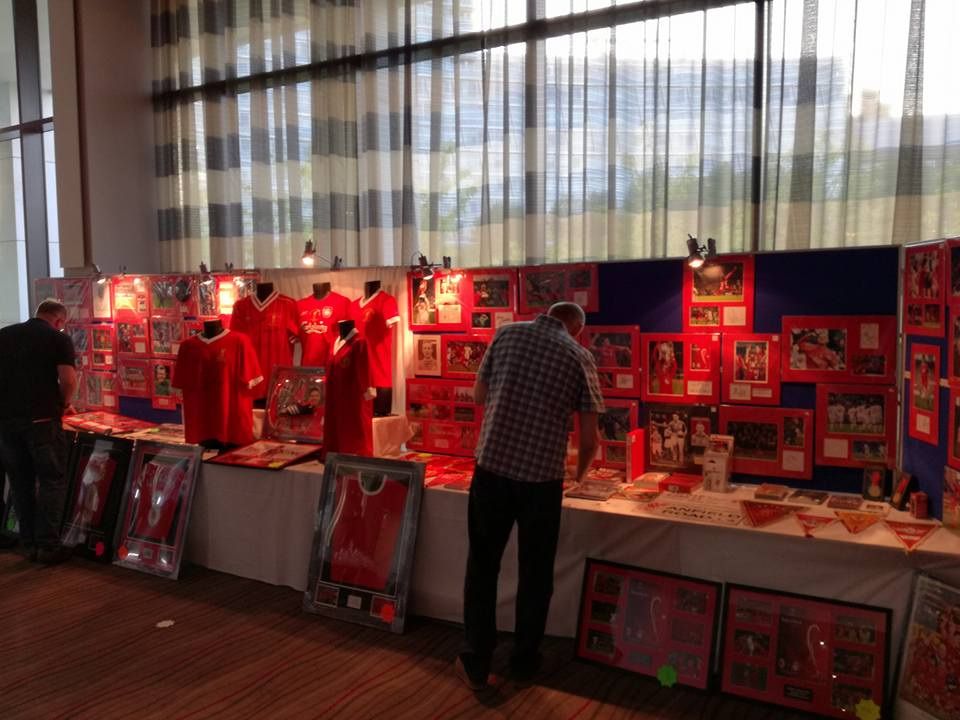 Overall the night was massively successful, with loads of money being raised for the #saveourkatie campaign. The celebrations were fantastic and the fans had a wonderful time reliving some of the former glory years of the club, as well as having a chance to meet some of their childhood heroes. For me, someone who was born long after this famous night, it was great to have an in-depth look at a snippet of history from this great club. Here’s to hoping that there will be many more reasons to celebrate in the years to come.