Jürgen Klopp’s first full season in the Anfield hotseat has begun in resounding fashion, with a 4-3 win at Arsenal representing the very best and worst characteristics of the current Liverpool setup. Continued redevelopment work at Anfield has fated Liverpool to pay a second challenging visit to North London in the space of three weeks, yet Klopp’s squad will arrive at White Hart Lane in good spirit. 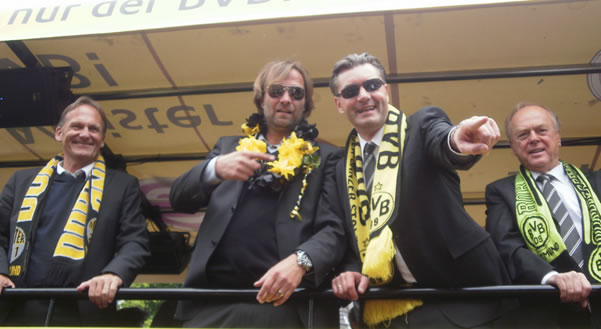 Pictured celebrating his first Bundesliga win in 2011, Jürgen Klopp has built an energetic, but not infallible, Liverpool squad. They face Tottenham away on 27 August. For the latest Liverpool odds, visit Matchbook.

At present, odds of around 2/1 are available for this, and would be well combined with a second market, such as HT/FT.

Liverpool’s 4-3 victory at the Emirates has wreaked havoc across the O/U market, and they are set to remain volatile in the near future. Naturally, Liverpool’s high tempo and attacking prowess creates dilemmas for even the most seasoned of gamblers, especially when the reds are faced with a similarly industrious side like Tottenham.

Though defensive solidarity remained wanting at the Emirates, the fitness level of Klopp’s starting XI impressed reds and neutrals alike. With this taken into account, a combative game is expected with plenty of chances at either end of the pitch.

Liverpool to win with an Asian Handicap of +1.5

The acquisition of Sadio Mane has added an extra dimension to Liverpool’s attack, as evidenced by his debut goal for the reds on the opening weekend. In opposition, Tottenham boast exceptionally talented Englishmen such as Delle Alli and Eric Dier, who captured the imagination of all in 2015-16. Those two in particular produced a direct playing style from deep that took Tottenham to the cusp of Premier League glory.

However, along with several others, they remain short of Liverpool’s overall condition. With this status quo balanced against Tottenham’s home advantage, the odds of a comfortable Liverpool win remain attractive. At the very least, there are historical precedents for a strong attacking performance from the reds, with eight unanswered goals in two White Hart Lane meetings preceding Klopp’s underwhelming debut in N17 last October.

An Asian Handicap (+1.5) win for Liverpool is currently priced at around 26/5.

Liverpool to lead at Half Time

A number of pundits are already citing this match as a potential decider for (at the very least) a top three spot, and no incentive is ever needed to win this fixture. For the most ardently optimistic of reds, Klopp’s men can be backed at approximately 52/21 to fly out of the proverbial traps and lead at half time against Tottenham.

Tottenham’s evidently talented squad has recently struggled to adapt to a high tempo from the off, meaning that gamblers can ultimately combine this with the above markets without much compunction.