WHERE TO NOW FOR BRENDAN RODGER’S & LIVERPOOL?

After Wednesday night’s debacle against lowly Carlisle Utd from League Two where Liverpool had Adam Bogdan to thank for getting them into the next round of the League Cup, the sense of desperation is palpable all around Anfield. 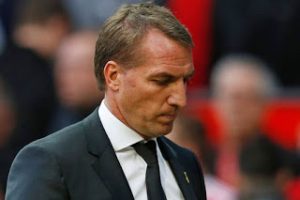 Manager Brendan Rodgers is under serious pressure to hold onto his job.

Thirteenth in the Premier League, 6 games without a win and God knows when we last scored more than one goal in a game.

The stats say that Liverpool had nearly 50 shots on goal against Carlisle last night, yet only one of those was an actual goal.

So plenty of attacking effort without much reward. True, there are problems not of the Ulster-man’s making:

Jordan Henderson’s injury is a major blow as the Liverpool Captain is out for two months with a foot injury.

Christian Benteke is also out for some time with hamstring issues after costing £32.5 million in the Summer.

Daniel Sturridge is still coming back from a long-term hip problem.

But, Liverpool recruited heavily again this Summer and should have a squad to cope with such issues.
The question is: Do Liverpool have the right Manager in place to produce a team capable of winning games they should be winning?

At this moment in time, it appears that answer is no.

Failure to beat Aston Villa at Anfield will surely mean the end for Brendan Rodgers  reign as Liverpool boss, who will always be remembered for that exciting Season when Suarez and Sturridge nearly won us the League.