LIKE HIM OR HATE HIM: WE NEED JOSE ENRIQUE

So Jose Enrique has decided to stay at LFC for the rest of the Season to see out his £65,000 a week contract as no other credible offers came in for the likable left-back.

Some would argue that he is just sitting back and lining his own pockets until his contract runs out in June 2016. 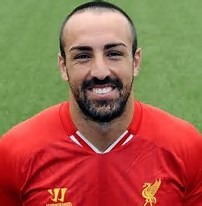 I think, we have a genuine shortage of cover in this position with Alberto Moreno and Joe Gomez the only incumbents this Season.

Gomez is an 18 year old rookie, signed as an up and coming centre back for the near future while the enigma that is Alberto Moreno is plainly an attacking left-winger who simply cannot defend.

Last week, Enrique was asked about his future at Liverpool while he was banished from training with the first-team squad.

He said he was happy to remain at Liverpool and he wanted to be there when needed as he felt his time would come to play at left-back again this Season with only Moreno standing in his way.

He was not one of Brendan Rodger’s signings maybe that’s why he has been banished to the sidelines. But the truth is he is was a good signing by Rafa Benitez in his time at Anfield.

In his time, he was a tenacious defender and always got up the line to help out in attack, just what Liverpool need right now.

He is with us until December at least, pick him Brendan Rodgers, he won’t let you or Liverpool down.