LIVERPOOL IN FOR DEPAY

Liverpool are in the hunt for Dutch striker Memphis Depay, the free-scoring forward was in the Manchester area last week. 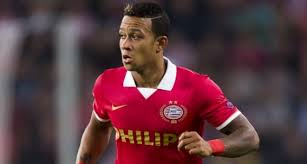 While Depay is understood to have travelled to England he did not hold talks with United – as he was instead given permission by PSV to enter into discussions with Liverpool.

Similarly, when a member of Depay’s team of representatives posted a picture of the Red Devils’ AON training centre on Twitter recently, it was taken as a further hint that a move to Old Trafford is in place, but again it is understood that the agent was conducting other business with a current United player.

Indeed, Dutch sources have confirmed that Brendan Rodgers’s side are far more advanced in negotiations than their old rivals.

Rodgers himself revealed over the weekend that he is a keen admirer:

“The kid is obviously a very talented player.

“It is clear we need a goal threat for next season. There will be a raft of players that will be looked at. Then it will be up to the club to see if they are affordable and available.

“There are targets that have been identified as a priority. We will have to see if they are available.”

United have made their interest in Depay known, as confirmed by PSV technical manager Marcel Brands, and the player’s two main representatives have been guests at Old Trafford this season.

And while Van Gaal’s side have always believed that a deal is well within their grasp, they are yet to go as far as Liverpool in opening negotiations with the player’s camp, leaving them in danger of missing out on a key summer target.

Depay knows Van Gaal well after the United boss gave the forward his debut for the Dutch side, but Rodgers is confident that his record of nurturing young talent – as he has done with Raheem Sterling at Anfield – will help Liverpool beat their rivals to his signature.

The Netherlands international forward has scored 21 goals in 28 Eredivisie appearances to help PSV to the Dutch title, and is widely regarded as one of the most promising players in European football.

Despite Liverpool’s efforts and United’s confidence, however, it is also understood that Paris Saint-Germain and Bayern Munich may be among a number of continental suitors.