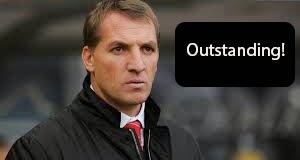 A 0-0 scoreline was a poor return against a struggling Everton side when they were there for the taking.

For some reason, known only to himself, Brendan Rodgers decided on a defensive approach to this game, this was his philosophy early on in the Season where Liverpool constantly struggled to win matches.

The Liverpool Manager latterly changed to a three-man defence and adopted an attacking style of play that had produced a number of clean-sheets and all-important wins.

So why he changed the approach is a mystery to me. Instead of attacking the opposition, pressing high up the pitch, scoring goals and winning games, Rodgers went for a safety-first policy.

Everytime a Liverpool player had the ball on the halfway line they chose to pass it backwards, rather then play it forwards to Countinho or Sterling.

Time after time it happened and it was so unnecessary.

It handed the impetus to Everton and a poor team like them couldn’t take advantage.

A good team like Tottenham on Tuesday evening most certainly will.