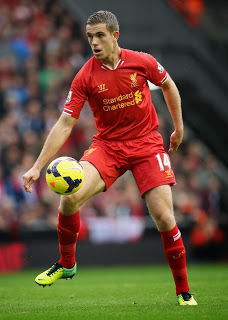 Jordan Henderson has joined Steven Gerrard, Daniel Sturridge and Jose Enrique on Liverpool’s ever-increasing injury list as the young midfielder was seen hobbling around Anfield on Monday in a protective boot after Kevin Nolan’s dangerous tackle in the win against West Ham at the weekend.

He is due to have a scan on his ankle on Tuesday morning to discover the extent of the damage and is a major doubt for the game against Spurs on Sunday.

With Captain Steven Gerrard today ruled out for six weeks following a hamstring tear, it leaves Brendan Rodgers shorn of cover in midfield going into a crucial run of five fixtures in fifteen days, which may well decide our Season.

Lets hope that Henderson recovers quickly enough to be in contention for Sunday’s game against Spurs.