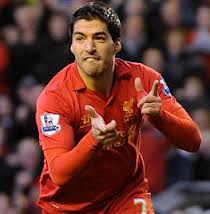 Mignolet 7/10: Did what he had to do in goal, went the wrong way for Morrison’s penalty, good game.

Toure 6/10: Playing on the right of a 3-man defence, does alright, think he prefers a more central role.

Skrtel 7/10: Was solid and dependable, blocked an Anelka shot on the line.

Cissoko 6/10: Did well in attack & defence, still adjusting to the pace of the Premier League.
Henderson 7/10: Covered a lot of ground in the game, might have scored too, good performance.

Gerrard 8/10: Was a great link-up between defence and attack, his crossing was terrific for Suarez’s goal.

Lucas 7/10: Back in the team, shored up the midfield very well.

Suarez 10/10: We are so lucky to have him still in our team, a magnificent hat trick and might have had more.

Sturridge 9/10: Was unlucky when a shot hit the crossbar, brilliant chip to cement the win for
Liverpool.