RAFA SACKED WHILE HE WAS ON HIS HOLIDAYS! 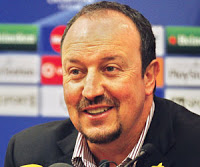 Rafa Benitez’ shabby treatment by MD Christian Purslow is now in the public domain.
After six years of dediation to Liverpool Football Club, his departure was swift and ruthless.
“It was really sad,” Benítez said when discussing his departure in an interview with Radio City today. “I was on holiday so it was a surprise that everything was going on in this way, but at the end of the day it has to be like this because Christian Purslow is now in charge and he decided to do it in this way. That is it”
Hardly the ‘Liverpool way’ of doing things.
When Gerrard Houllier was relieved of his duties, the old Liverpool board of David Moores and company held a dignified press conference along with Houllier, thanking him for his time at the club and wishing him well for the future.
That was a luxury not afforded to Rafa Benitez, sadly and our club is all the poorer for it.
Hang your head in shame Purslow, why the great haste in sacking the manager when you are taking so long in finding a replacement?